SAS 134: Your audit report is changing — Are you ready?

For calendar year-end entities, your December 31, 2019, audit report may look a lot like what you are used to. But did you know that going forward, the look and feel of your audit report will be changing dramatically?

This new standard makes fundamental changes in the layout of the audit report, as well as the information required to be presented in all auditor reports issued under generally accepted auditing standards (GAAS). The standard is effective for reporting periods ending on or after December 15, 2020.

SAS 134 was issued by the ASB to: 1) converge GAAS with the auditor reporting standards promulgated by the International Auditing and Assurance Standards Board (IAASB) and 2) to create consistency with the revised auditor reporting model supported by the Public Company Accounting Oversight Board (PCAOB).

Below is an example of how the beginning portion of the auditor’s report will look: 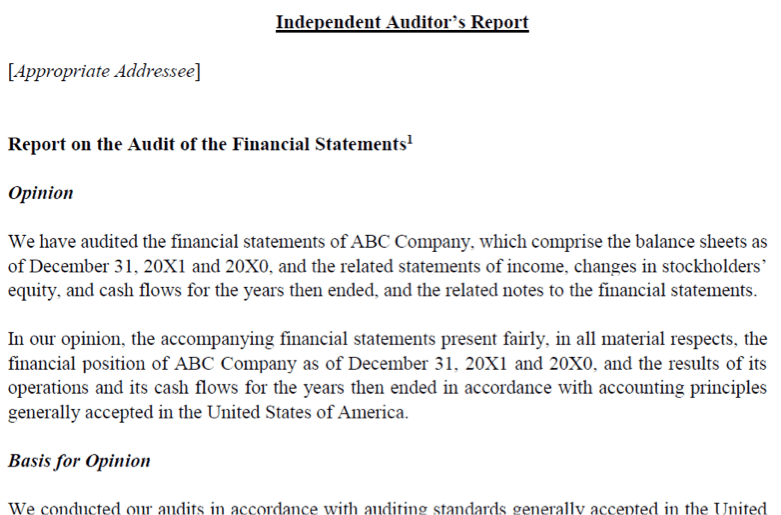 Below is an example of what the KAM section of the auditor’s report may look like for a December 31, 2020, year-end:

While the use of KAMs may not be significant in the private sector for closely-held companies with active ownership, certain users of the financial statements are expected to benefit from these additional disclosures, including private equity firms and not-for-profit entities.

This is because one of the requirements of the new expanded “Responsibilities of Management” section specifically states that “Management is required to evaluate, whether there are conditions or events, considered in the aggregate, that raise substantial doubt about the Company’s ability to continue as a going concern ….” This sentence is present whether or not there is actually any doubt about going concern.

Now that you know what the changes are, what do you have to do to prepare for such changes?

You should begin discussions with the users of your financial statements (including banks, shareholders, investors and vendors) related to these changes so that all will understand the meaning behind the new wording when it takes effect.

Also, consider whether the reporting of KAMs would be of interest to the users of your financial statements so that you can appropriately engage your Wipfli auditors when the time comes.

Now is the time to start thinking about these changes so that you and your company and stakeholders can fully benefit from the enhancements the new reporting requirements provide.