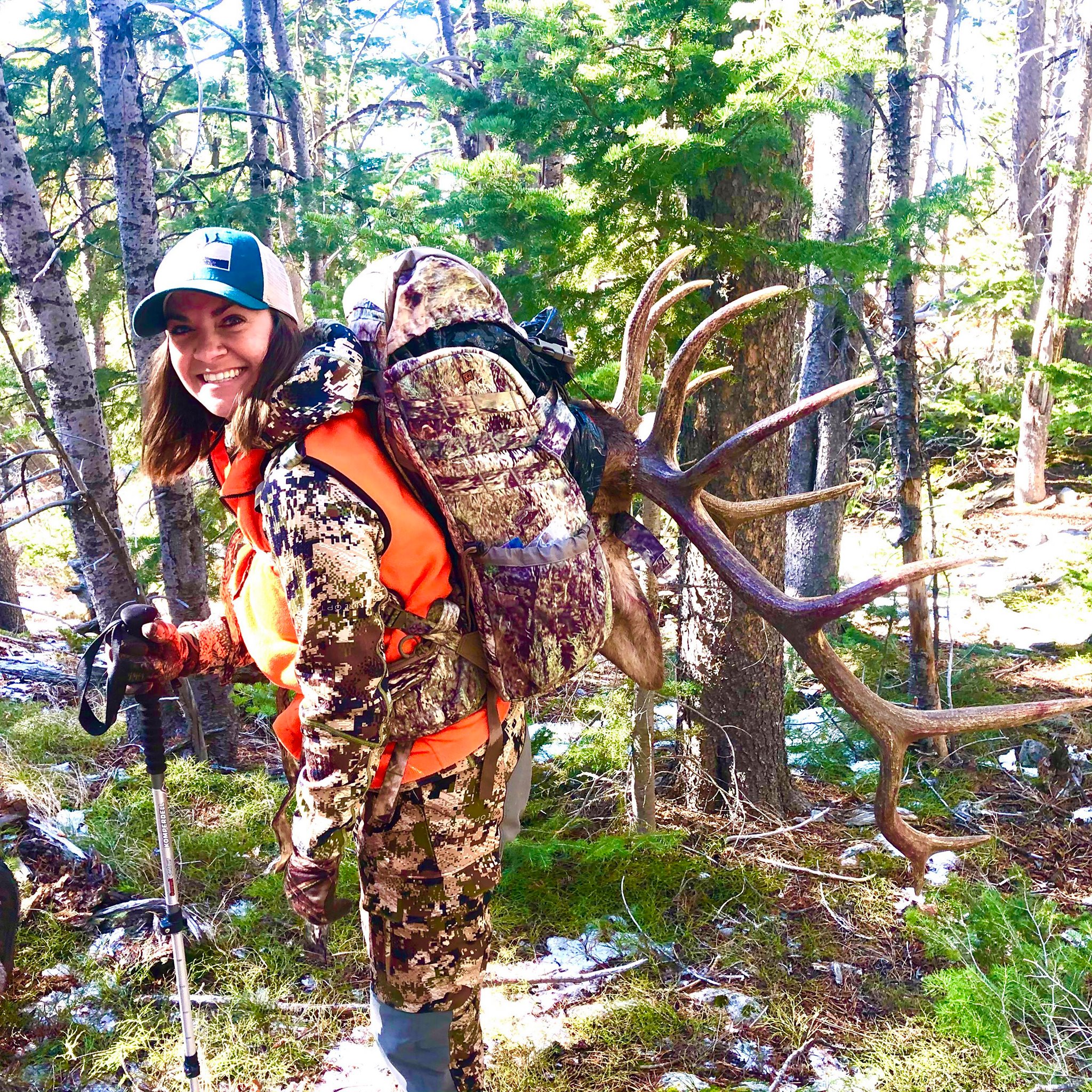 Rachel brings her prized trophy home from the mountain.

While 2021 found many people reining in plans as they lowered expectations about a return to post-pandemic, normal life, Rachel Hammond, a trainer for the past five years in Wipfli’s talent and culture team, set her own sights high and big.

Last Halloween, she achieved a long-elusive goal of hers: the successful pursuit of an 800-lb. bull elk on a Montana mountaintop just west of Yellowstone National Park in the Madison Valley mountain range. “I’ve hunted since I was a kid, and this has been a goal of mine for at least 10 years,” she says.

Hammond doesn’t hesitate to identify “perseverance” as the Wipfli value that most resonates with her. She has few fears, she says, but when she identifies something that makes her uncomfortable, she finds a way to lean in more.

While scoring the bull elk may have involved a bit of luck, it also depended on dedication and skills, which she honed over the years with support from her proud father, Phil, who is also her frequent hunting partner. What did the feat entail?

Father and daughter rose from their cabin at 4 a.m. last October 31, began the 4.5-mile expedition with their gear up the mountain on horseback, guided by moonlight. They hiked the last mile-and-a-half on foot when the terrain got too steep for the horses.

Through powerful binoculars, they spotted the small group of bachelor elk over the crest finishing their breakfast just after dawn, and they knew they needed to act fast and decisively. “I had to shoot 425 yards over the valley,” aided by a scope with eight-times magnification, Rachel says. “All before daylight.”

“Elk are incredibly smart animals. You have to work extra hard for them. They can smell you from as far as 400 yards away,” she says. “They have the advantage in this situation. When you’re lucky enough to be in the right place, it’s really special.”

After the swift and straightforward kill came the quartering and packaging of their quarry, which they transported down the mountain on their backs over two days. Suffice it to say, Rachel and her family now have enough elk meat in their freezer to easily feed them until next winter. 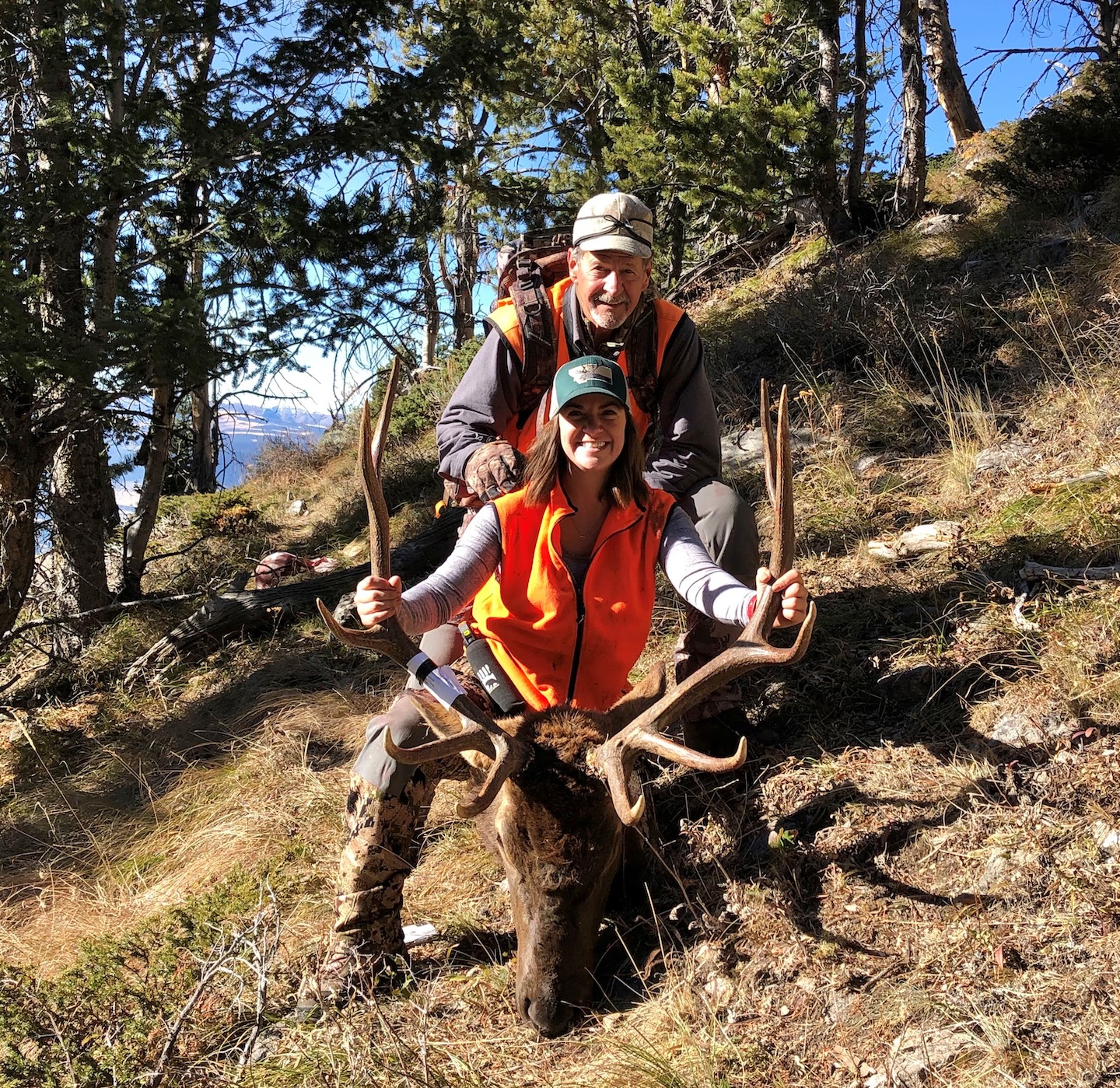 Rachel and her regular hunting partner, her dad Phil.

At Hastings College in Nebraska, she added a public communication minor to her business administration degree motivated largely to face her fear of public speaking head on. The lessons there helped allay some of those anxieties during her first few fundraising, event planning and marketing jobs after graduation in 2011.

But joining Wipfli led to an unexpected lightbulb moment. Rachel had been working in human resources for a small public accounting firm in Billings, Montana that Wipfli acquired in 2017. A few months later, she was asked to lead her first in-person training presentation, a course called Developing an Outward Mindset, in Bedford, New Hampshire. “There were slides, but there was no script, and so there were all sorts of terrifying thoughts happening in my head,” she concedes. “Oh my gosh, can I do this? What did I get myself into?”

As soon as she arrived in the classroom and stood up before the group of about 30 participants, she felt an almost-immediate transformation. “The energy was different. The content was great. And I figured out that if I'm passionate about the subject, I can stand up in front of anybody and talk about it,” she explains. “Fear comes from not being passionate about what you’re doing. When I think back to school, when they gave you something to learn and talk about, that was very regimented, and harder to get behind.”

But taking on work that can make an immediate impact on others, like presenting Wipfli’s Developing an Outward Mindset course, was energizing and empowering for her. Before the pandemic, Rachel traveled frequently, typically every other week, to lead the culture trainings that are part of the foundational, results-focused culture of training for Wipfli associates.

Associate well-being continues to be a forefront concern for Rachel. She was an integral part of the team that brought the Virgin Pulse platform to the firm in early January to motivate staff to take steps toward healthier living in all aspects of their life. By February, about half the firm had signed up, which bolstered Rachel’s pride in helping get the project launched.

After the initial push to register, she acknowledged that it could be a challenge to have associates stay engaged with the app, which offers financial incentives for those reaching goals of their choosing, related to everything from to physical activity and eating habits to sleep and water consumption.

Rachel should have little problem reaching her activity goals, which, in addition to hunting, span a wide range of outdoor passions, from fly fishing to horseback riding and lately archery. 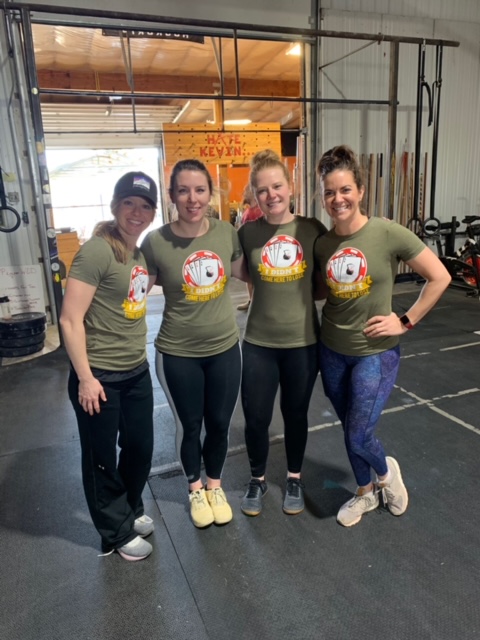 Rachel, far right, and Wipfli colleagues in Billings participated in a team event at the gym.

For 10 years, she has been a CrossFit fan, hitting the gym almost daily in the cold weather months to complete her high-intensity interval workouts, religiously tracking her progress.

But that commitment wasn’t without hiccups. A few years into CrossFit workouts, she was persuaded to participate in her first competition with others. She qualified for the intermediate level and was jazzed about major preparation. She enjoyed the grueling contest, but alas, the results surprised her. “I gave it my all and ended coming in dead last,” out of about 30 participants, she says. “I was really discouraged, and I felt like I had failed.”

After about a year, she realized how much she missed those workouts, and cautiously made her way back to the gym.

“I had to start all over. I lost all the strength and stamina I had built. But there were no judgments. It was good to be back,” she says.

Seven years later, and she hasn’t stopped. Today’s she’s encouraging others as a CrossFit coach.

Two to three evenings a week after work, she spends time leading by example, serving as a role model, especially for people tempted to give up on a difficult challenge. The personal passion she has — and shares — for the sport has been another source of confidence that fuels her in other hard endeavors.

“I learned there’s a lot to be gained by not giving up,” she says.

It’s a sentiment that resonates whether she’s working it at the gym, in a Wipfli training class, or facing off with an 800 lb. elk.