What Is Your Bank Really Worth?

With the struggles of the Great Recession largely in the rearview mirror, the banking industry has repositioned itself for growth profitability. According to the Q4 2015 Quarterly Banking Profile released by the FDIC, improved earnings have been a widespread trend, with more than half of all federally insured banks reporting year-over-year quarterly earnings growth and 57% of community banks reporting improved earnings. Many banks that experienced challenges in their loan portfolios between 2009 and 2012 have largely cleaned up their balance sheets, resulting in improved nonperforming asset ratios and lower provisions for loan losses. However, despite improvement in loan portfolios, banks today face other issues in the form of net interest margin compression and stagnating or, in some cases, decreasing loan-to-deposit ratios. The growth in online banking presents opportunities and challenges for banks as consumers, and specifically millennials, are demanding a more flexible, real-time relationship with their bank. Banks that have embraced mobile, real-time banking are reaping the rewards in the form of new and younger depositors, while slower-to-react financial institutions are now being forced into a defensive posture and are playing technological catch-up.

Let’s review what other community banks are selling for. Since 2011, the number of transactions involving community banks has trended upward. According to SNL Financial’s M&A Transaction Database, 116 M&A transactions took place during 2011, compared to 250 during 2015. We believe the increase in transactions relates directly to improving health of U.S. banks as well as providing financial institutions an alternative method of growth rather than just relying on organic means.

A review of bank M&A transactions shows multiples paid during 2015 were at or near their highest point since 2011. According to SNL Financial’s M&A Transaction Database, 2015 saw median price-toearnings (P/E) and price-to-tangible-book (P/TBV) multiples of 22.3 and 145.1, respectively. This is compared to 25.2 and 143.3 during 2011. When looking only at transactions for which the target NPAs were below 2% and the latest 12 months’ (LTM) ROAA was positive, the median P/E and P/TBV multiples were 22.7 and 148.1 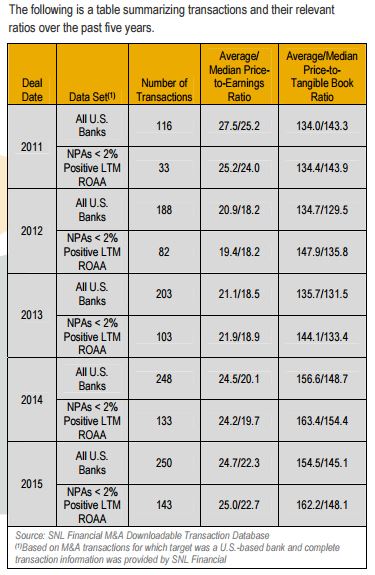 The guideline transaction method previously discussed is what is known as a market approach. Another method used is an income approach. The income approach attempts to determine what an investor would be willing to pay for the bank given an earnings stream. The earnings stream can be based on historical financial statements with the understanding that the past is indicative of the future or based on projections. The problem with projections is that many banks can provide a budget for next year but cannot with any certainty provide a forecast for two or more years down the road, and who can blame them? Did anyone see the economic uncertainty of 2008 through 2011 coming? The income statements from the past can be used, but the question becomes, “Should a weighted average or simple average be used and over how many years?” Our experience has been that the income approach undervalues strong performing banks, and if there really isn’t much profit in the poorperforming banks, the method does not apply to them.

In past years, the rules of thumb regarding multiples of book value were used prevalently and might have been quite accurate, but given the variables in today’s quickly changing environment, it’s quite dangerous to use those rules of thumb in making decisions. The adage “every case is different” certainly applies to banks today. Additional items to consider in establishing value today include the following items. The list is not meant to be all-inclusive, but rather it provides some items an appraiser will consider.

After five years of recovery in the banking industry, improved balance sheets and income statements are driving bank valuations toward pre-recession levels. Rapidly evolving technology and changes in consumer demographics are providing banks with new opportunities to grow their balance sheets and earnings. Those banks which are able to harness and leverage these new opportunities will earn a premium on their valuation and stand out among a crowded field.