A blockchain is a distributed database hosted across different computers across the globe, which maintains a continuously growing list of records called “blocks” secured from tampering and revision. Each block contains a timestamp and a link to a previous block, which makes each one of them very unique and immutable.

Blockchain technology became famous through bitcoin1, a “cryptocurrency2” conceived in 2008 and first implemented in 2009. Blockchain served as the public digital ledger for all transactions. The design of bitcoin has been the inspiration for other applications of blockchain.

Experts have identified a number of business use cases for blockchain. I have shortlisted what appears to be the top four of them for me, which are applicable to financial services. The maturity cycle for these various use cases depends on a number of factors, not the least of which are financial institution requirements for interoperability, confidentiality, a regulatory and legal framework, and optionality.

Blockchain technology is very likely to disrupt the system of payments that exist today. While there is ground to be covered before we can process trillions of transactions a second on a blockchain protocol, the number of payment transactions using blockchain is increasing every year, with significant effort and investment being put forth. For example, R3, an innovative financial firm, is leading a research effort backed by 50 of the world’s largest banks. This team has started experiments with Microsoft’s Azurebased blockchain-as-a-Service to develop Erethreum as a bank-tobank global transaction system. It is an experiment today, but tomorrow, this is going to be a critical development area, and it is not just for global bank-to-bank transfers but also for any exchange of value peer-to-peer over the Internet. 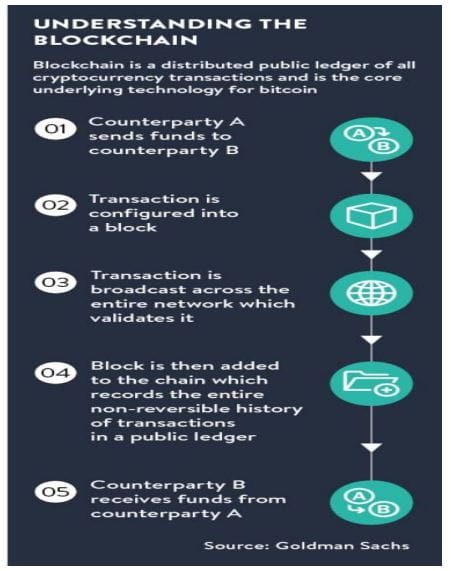 Alongside biometrics, identity can be uniquely authenticated in an irrefutable, immutable, and secure manner using blockchain technology. Current methods use problematic password-based systems of shared secrets exchanged and stored on systems vulnerable to security breaches. Blockchain-based authentication systems are based on irrefutable identity verification using digital signatures with public key cryptography, where the only check performed is whether the transaction was signed by the correct private key. It is inferred that whoever has access to the private key is the owner, and the exact identity of the owner is deemed irrelevant.

Usage of blockchain technology might as well feed into scalability of payment transactions. For example, when my digital identities are recorded on blockchain protocol, then my things can have authorization to transact on my behalf. In other words, when I have an identity recorded on a shared ledger, then I can add devices to my identity, such as smart phones or cars. Over time, I can add smart objects too, from my shoes to my fridge to my heating to my spectacles to my anything. This is where the most likely breakthrough will come, as many companies are developing ideas in this space, known as the Internet of Things (IoT).

It is the opinion of most of the industry experts that in the future, banking differentiation would be based on information enrichment. financial institution that is rich in data can increase its revenue significantly by turning that data into actionable analytical information for its clients. This will be a big area of competitive development over the next decade. Recording the transactions of anything with a clear date and timestamp becomes even more compelling when we apply this to assets, especially assets in trade finance. Think of all those components being bought and sold in the supply chains of the world, and then think about all of those components being recorded in near real-time on a shared ledger. That’s smart assets in the supply chain. We have talked for a long time, for example, about real-time treasury workstations, but we can never have real-time when bills of lading and letters of credit have to be recorded and documented against asset movements. Digitize the bills of lading and letters of credit and voila! We suddenly have a much smarter view of the world. This is already revolutionizing trade finance, working capital, and supply chain management, with start-ups like Tradle and Wave leading the way. A smart asset system can record not only the asset in the supply chain, but also its serial numbers and value and any other information we need to know about that asset— who is it coming from and where is it going, how it relates to other assets in the supply chain, the shipper and receiver of the goods at the port or airport, the components and component value that comprise the asset, tax and government clearance information, and more. That is why it is a smart asset tracking system, and for financial institutions competing in the Internet age, this becomes the competitive battleground.

In the shorter term, clearing and settlement is proving to be the most active use case area for blockchain in banking, mainly because it gives a short-term win with real cost savings. Clearing and settlement costs billions, and according to Santander’s 2015 report, it is estimated that moving this into a digital record, near real-time and over the Internet, will save the industry $20 billion a year or more in overhead costs due to the elimination of D+3. D+3, or T+3, is the three-day clearing and settlement cycle common to most investment markets today. D+3 is the reason we have custodial services (CSDs), central counterparty clearing systems (CCPs), and complex collateral management as intra-day, end of day. After three days, we have to ensure all counterparty balances are matched, reconciled, and resolved across global trading systems involving thousands of investors, day traders, pension funds, market makers, asset managers, and more. Nevertheless, many firms are leading the initiative to digitize the clearing and settlement structures, from Blythe Masters’ Digital Asset Holdings with the Hyperledger to Overstock with T0, along with many other key and emerging players such as Epiphyte, Clearmatics, and SETL. Eventually, there will be a new clearing system created with blockchain, and what intrigues me most is who will be running it?