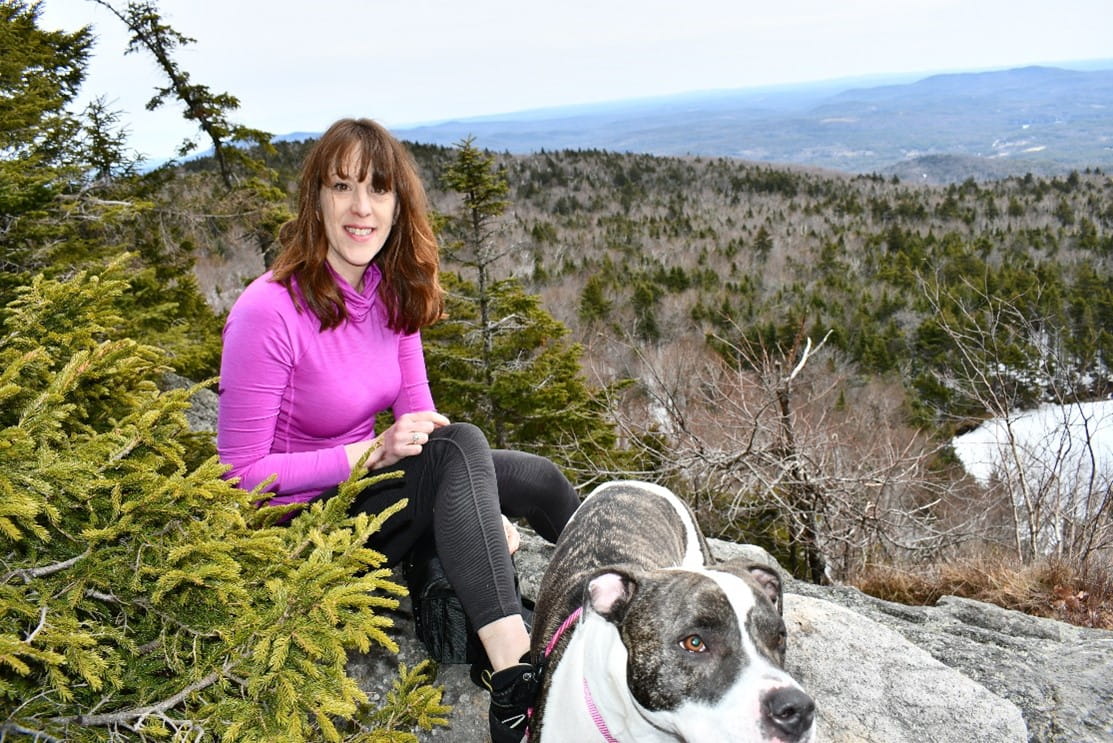 Erin and her companion Harley on a hike near her home in New Hampshire’s White Mountains.

"Finish each day and be done with it. You have done what you could. Some blunders and absurdities no doubt crept in; forget them as soon as you can. Tomorrow is a new day. You shall begin it serenely and with too high a spirit to be encumbered with your old nonsense." — Ralph Waldo Emerson

Whether she’s racing around the office (literally) during tax season or climbing Mount Kilimanjaro, Erin Brunelle glances at these words from Emerson that hang by her desk in Wipfli’s Bedford, N.H. office to help her get through most challenges.

Erin started at Wipfli in January 2021 as an administrative specialist in the tax area (after eight years as the office manager for a recycling business) and concedes she used to be a worrier. But she purposefully heeds the reminder to focus on the things within her control and avoid second-guessing herself and others. “I know that even if I’ve had a bad day, I don’t dwell on it. There’s always a fresh start tomorrow,” she said.

Her appreciation of her role at Wipfli is straightforward: “I really enjoy supporting the people on my team. Working here is all about the people,” she says.

Erin’s commitment to excellence, perseverance and caring, among Wipfli’s core values, resonate strongly in her work and diverse outside pursuits.

Indeed, here’s a fact that many may find surprising but tells you a lot about Erin: After donating a kidney to save someone’s life, you can still be cleared to climb one of the world’s tallest mountains just a couple of months after surgery.

A goal to climb

Erin is the kind of person who quietly sets big goals — and just as quietly meets them. When a good friend first raised the idea of climbing Kilimanjaro in 2019, she was immediately onboard. Mountain-climbing and camping have long been among her favorite pastimes.

Living near New Hampshire’s White Mountains, she’s hiked at least 20 of them over the past five years, though the highest of those peaks (Mount Washington) is just over 6,000 feet, less than a third of Kilimanjaro’s height.

By Christmas of 2019, about 10 of her friends and family members were thinking of joining the Kilimanjaro trek, too. But soon the COVID-19 pandemic made most of them abandon the idea. For her part, Erin felt more comfortable postponing the trip until travel conditions seemed safer, but her enthusiasm never waned. (Her friend who pitched the idea didn’t want to wait and completed the trek in 2020.) 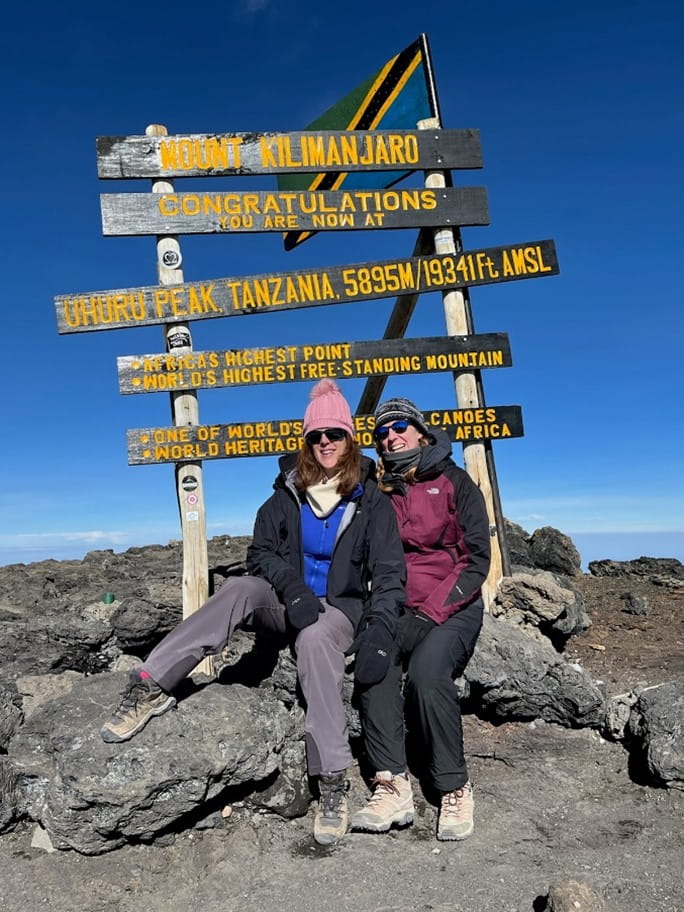 Finally, in January 2022, Erin moved forward with her plans. Her climbing partner was her sister-in-law, Angel. The trek proved to be like no other she’d ever done. Her asthma kicked in because of the extreme altitude, but she just took each day, each hour, each step one at a time. She and the three other trekkers in her group (along with the most solicitous crew in the world) together reached the summit, Uruhu Peak, which was at once empowering and humbling.

“The main thing I learned from the experience was about being present,” said Erin, who was just shy of her 52nd birthday during the climb. “When you’re working, you’re going a million miles an hour and going in, like, 10 different directions. I enjoyed simply being in the moment (for those eight days).”

Her husband and two adult sons, meanwhile, cheered from afar. 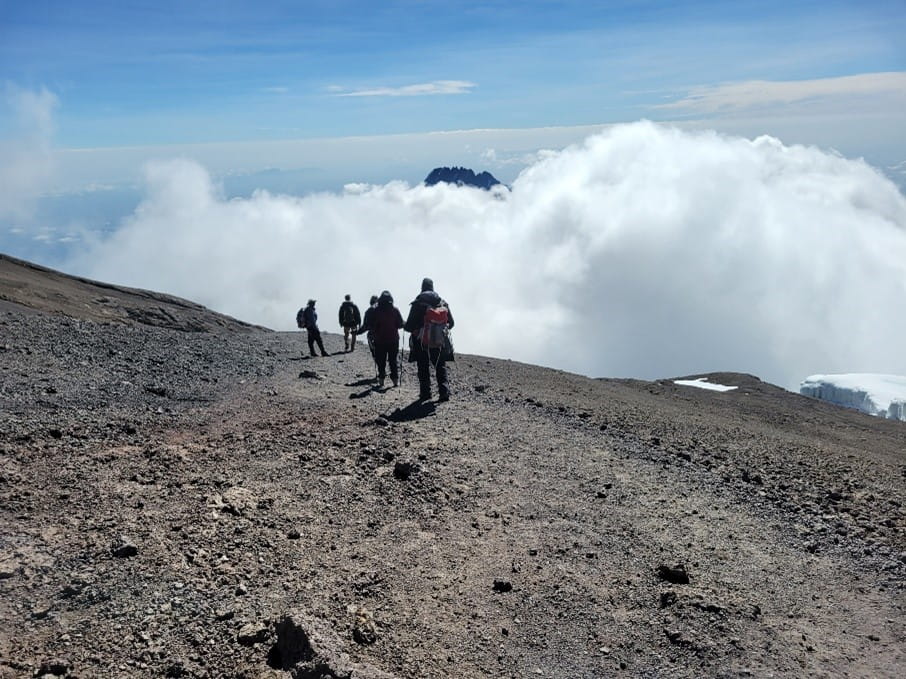 Erin’s team had a spectacular run-in with the clouds

Giving the gift of life

Three years ago, Erin donated one of her kidneys in response to an urgent request from her sister-in-law’s brother, whose kidneys were failing due to Alport Syndrome, a hereditary disease that affected several members of their family. She didn’t hesitant to go through the testing and exams to see if she’d qualify — which she did.

Her donation ended up being part of a broader organ exchange, and Erin’s kidney was given to a man in New York. Her relative received one from someone else in the exchange and is doing fine.

A few short months later, her Kilimanjaro plans got underway. Erin had asked her medical team at Massachusetts General Hospital if there were any health reasons for her not to pursue the trek. “They had no problems with it. They were very excited for me,” she says.

She is thrilled that she was able to help someone in need and wants to make others aware of the important role of living donor registries. Many don’t even realize the widespread need for living donors, and outcomes for patients in renal failure are typically better with a living donor compared to a deceased donor. “I want people to know that you can save a life and still have your own,” she says.

And there’s no reason you can’t scale a mountain soon afterward. 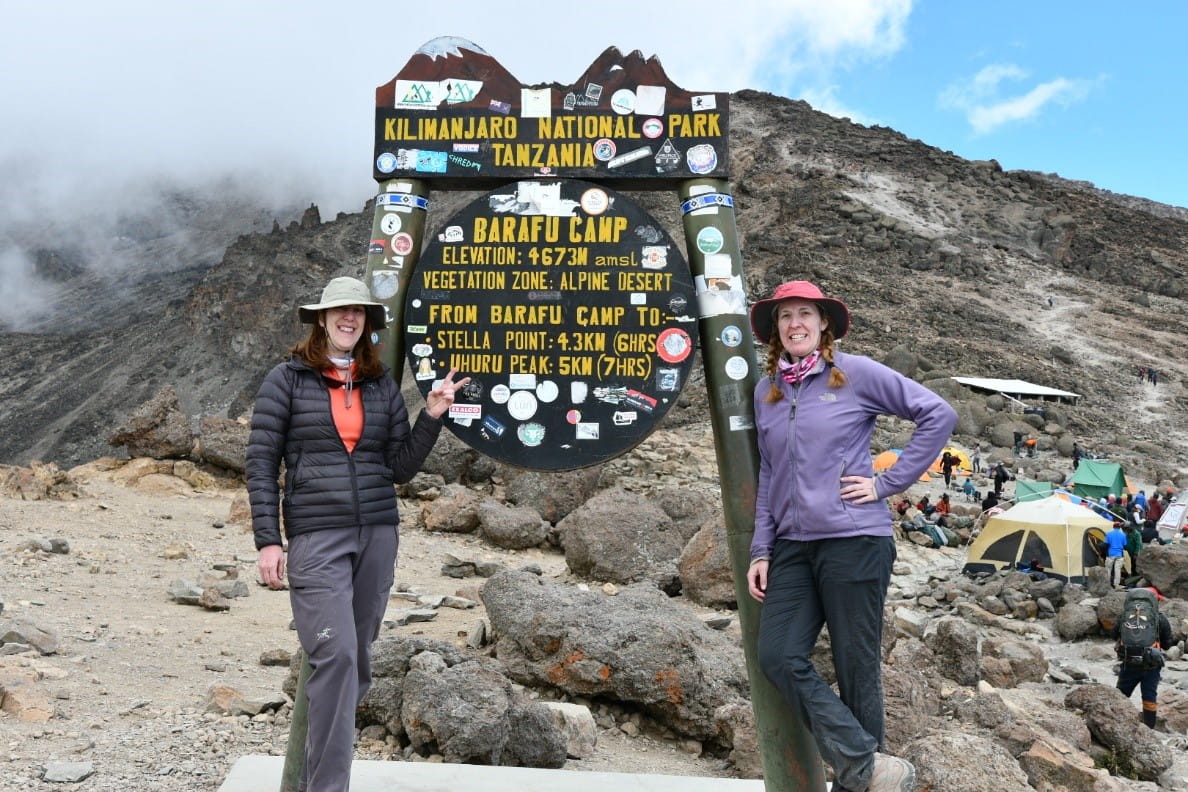 Erin, left, and Angel were well-positioned for the final ascent to the summit.