It could well have been the prospect of a $300 top prize, catered lunch and commemorative T-shirt that caught the eye of the 140 undergraduates at West Chester University outside Philadelphia who signed up for last fall’s second annual ethics case competition.

But the analytical, creative problem-solving and presentation skills the students developed for the event were among the intangible and priceless benefits they accrued. The full day of friendly but intense competition was made possible by Wipfli which sponsored the event for the second time and is on board to be back a third time this October. Eight Wipfli partners and associates served as judges for the day-long event.

“It was neat to see how the students thought and to see their interactions. A large part of the scoring was how well they worked together,” said Torpey White, a partner in the firm’s risk advisory practice. White and other members of the firm’s Philadelphia and Radnor, Pa., offices helped coordinate Wipfli’s efforts. 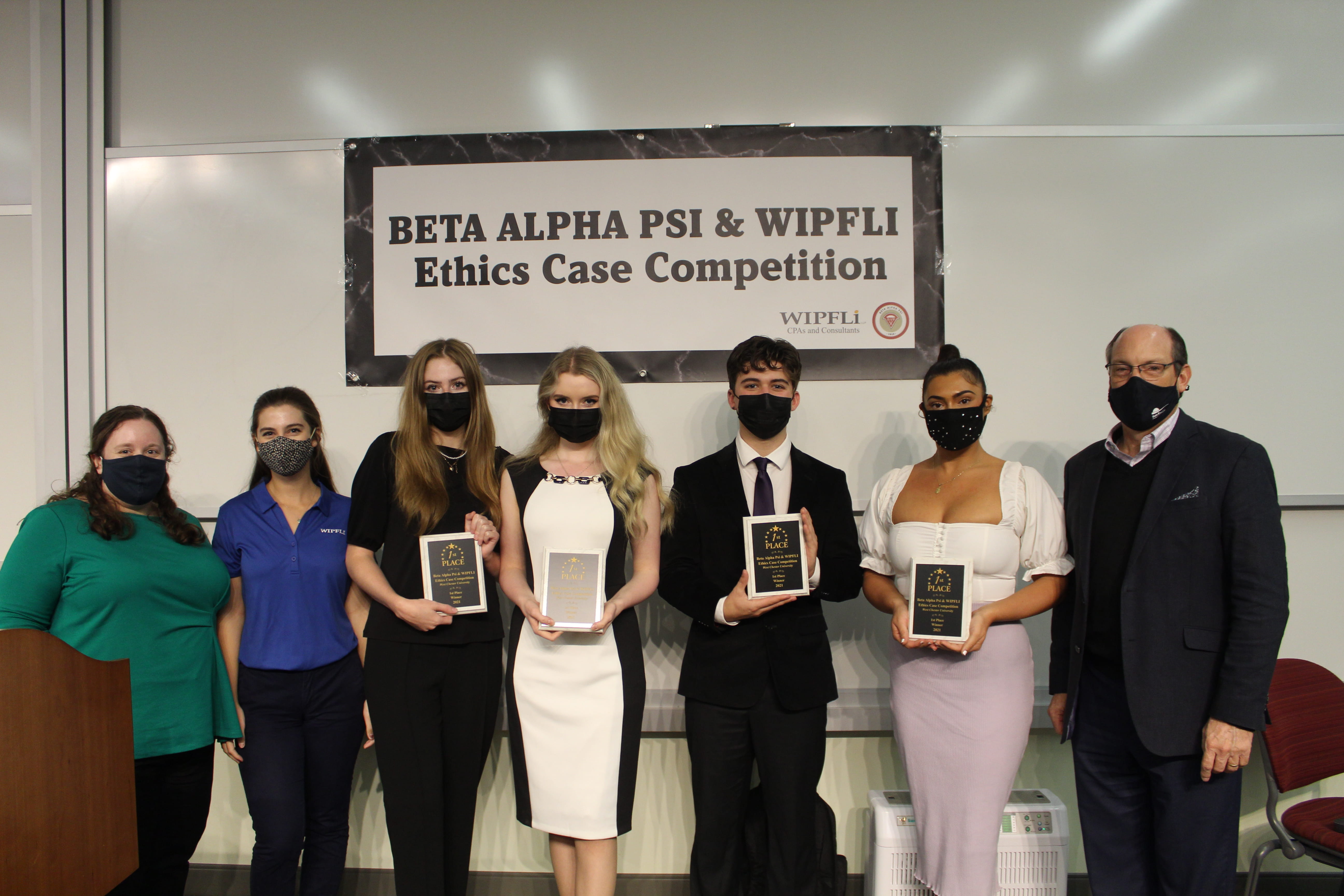 The Wipfli Foundation has long funded scholarships and textbook purchases for students, but the case competition has taken Wipfli’s involvement with West Chester to a new level.

“Wipfli is a critical partner in the success of our students and the success of our program,” said Peter Oehlers, the West Chester accounting professor who serves as faculty advisor to the school chapter of the accounting honor society Beta Alpha Psi. The student organization handles the planning and logistics for the competition.

Lexi Laskowski, a 2020 West Chester graduate who majored in accounting, proposed the concept of the case competition to the department with the idea that blending ethics and business would be engaging and highly relevant for students. “It’s more than just a hot topic. Ethics is especially important in today’s business landscape,” she said.

“I participated in other kinds of case competitions in my academic career, and they were helpful because you really got to practice what you were learning in the classroom,” Laskowski said. “It’s an opportunity to practice collaboration skills, and work on creative thinking and problem solving in a more holistic and interactive way.”

The university skipped the contest during the COVID disruption of 2020, but brought it back with great enthusiasm this past academic year. 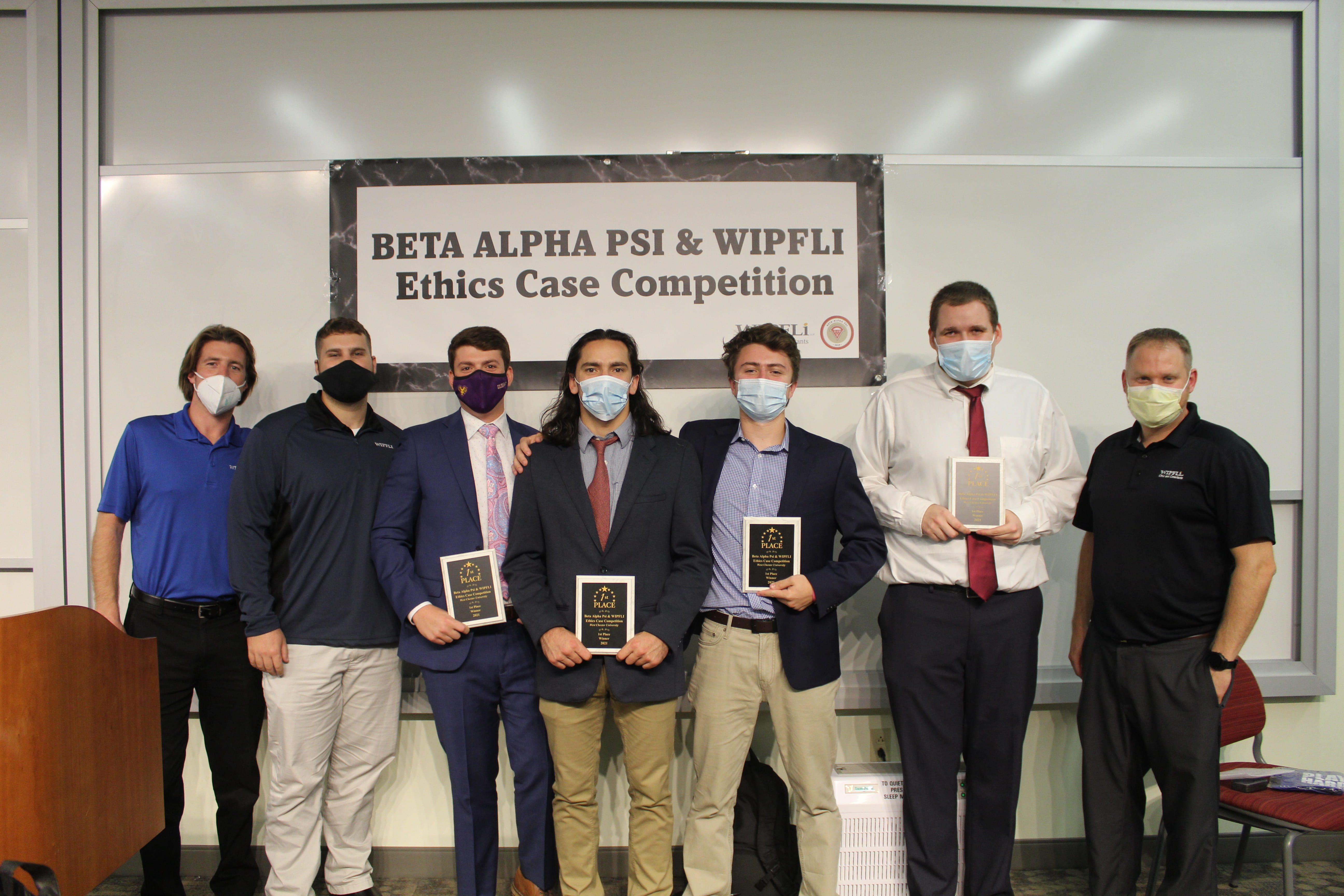 It was the first in-person event held by the accounting department after the campus closure due to the pandemic. Student participants were divided into 25 teams of 4 to 6 people and had two weeks to prepare for the competition which involved a 10-minute presentation followed by five minutes of Q & A by the Wipfli judges. The overall group was split in half and judged by separate panels, resulting in two winning teams in which each member received $300, plus $150 for second place and $50 for third place competitors.

Wipfli underwrote the roughly $15,000 total cost of the event.

The case study they tackled last fall centered on ecommerce giant Amazon’s new program to reward customers for submitting shopping receipts from non-Amazon merchants. The insights would provide Amazon with valuable seller data to boost their competitive advantage.  The key ethical questions: Does this offer represent a threat or an opportunity for consumers and what is its larger impact on retail market?

“Students got to apply theory to the business world. They could see that accounting involves more than who can add numbers the fastest,” White added. “We judged them on their rationale for reaching the conclusion they did.”

Student director Gabby Ciarlante, left, and members of the planning committee were recognized for their exemplary preparations.

Sakina Farooq, a rising sophomore, signed up for the competition largely because a professor was offering extra credit to all students who participated. “The experience was very exciting as it was the first in-person experience that was happening in the business building (since the start of the pandemic),” she said. “Although I only knew one of my team members ahead of time, I got to build connections with my other team members who were upperclassmen, so they gave lots of advice. Our team worked well together, and we all were excited to be a part of the experience.”

Although her team didn’t place, Farooq said they learned about collaboration, listening, and ultimately finding consensus as they put together their presentations. She’s looking forward to serving as student director of the competition. “I am excited to work with Wipfli to make this competition a success. I will miss competing, but I am excited to be a part of this event in a different way.”

About 60% of the participants last year were accounting majors with the rest divided among other academic areas including mathematics, computer science, economics and marketing.

Gabby Ciarlante, a rising junior and accounting major who served as student director for the fall competition, was delighted to learn that she was also awarded a $1,000 scholarship from Wipfli for the coming school year in recognition of her academic success and leadership in organizing the latest competition.

Ciarlante also noted the value of the event as a networking opportunity for students. Two or three West Chester students each year typically become interns at Wipfli. “It definitely has a positive impact on recruiting,” she said. “Everyone now knows what Wipfli is.”