In February 2016, the Financial Accounting Standards Board (FASB) issued Accounting Standards Update (ASU) 2016-02 Leases (Topic 842). Topic 842 defines a lease as “a contract, or part of a contract, that conveys the right to control the use of identified property, plant, or equipment (an identified asset) for a period of time in exchange for consideration.” Users of financial statements have criticized the fact that previous GAAP did not provide the full representation of operating lease transactions, which led to the FASB issuing this new standard. The key principle of Topic 842 is that lessees should recognize the asset and liability that arises from a lease. The asset that is recognized is termed a right-of-use (ROU) asset, and the corresponding liability represents the future lease payments.

When determining the proper accounting for a lease under Topic 842, the following steps should be taken:

An entity should consider the noncancelable period of a lease. Optional periods to extend a lease should also be considered if at the commencement date lessees are reasonably certain to exercise their option to extend the lease.

Lease payments include fixed payments (less any lease incentives), variable payments, and the exercise price of a purchase option if lessees are reasonably certain to exercise their option.

From a lessee’s perspective, the discount rate is the rate implicit in the lease unless that rate cannot be readily determined. In that case, lessees are required to use their incremental borrowing rate.

Under Topic 842, leases from a lessee’s perspective are classified as operating or finance leases. The criteria for distinguishing between these two types of leases are substantially similar to the criteria for distinguishing between operating and capital leases under previous GAAP. Lessees should classify a lease as a finance lease if it meets any of the following criteria at the commencement of the lease:

In transitioning to the new standard, lessees and lessors are required to recognize and measure leases at the beginning of the earliest period presented using a modified retrospective approach, which allows for optional practical expedients. An entity that elects to apply the practical expedients will, in effect, continue to account for leases that commenced before the effective date in accordance with previous GAAP unless the lease is modified, except that lessees are required to recognize a right-of-use asset and a lease liability for all operating leases at each reporting date based on the present value of the remaining minimum rental payments that were tracked and disclosed under previous GAAP.

While the application of this standard will impact primarily the balance sheet, companies should spend time now assessing how it will impact loan covenants and other contractual agreements. When entering into new debt agreements, be sure that covenants based on debt to equity or debt service coverage ratios are written such that the ratios will be adjusted when the standard becomes effective.

Below is an example to illustrate the accounting for an operating and finance lease:

The following table illustrates how the accounting for this lease would differ depending on the classification. Journal entries for the initial entry and year one for both types of leases have been included below. 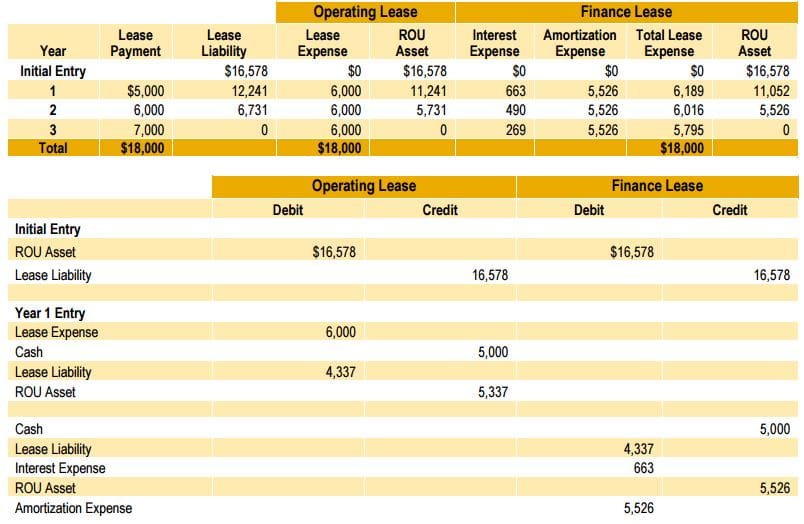