Workplace Fraud: Stats That Will Keep You Skeptical

Fraud happens. It happens to organizations of all sizes and across every industry. It happens even to the best of companies, and often it’s committed by the best of employees. And in almost every instance, businesses hit by occupational fraud say they never dreamed it would happen to them.

Thanks to research, reporting, and statistics, we understand much about how fraud is committed and how to prevent it. If you believe fraud risks are under control at your organization, here are a few eye-opening statistics that should make you a bit more skeptical…and help keep you a lot more vigilant.

Views and attitudes about ethical behavior are formed early. You may be surprised to learn that in one survey of nearly 30,000 high school students:

It Doesn’t Stop There

Hiring smart grads is on every organization’s talent attraction list. In addition, more MBAs are in the workplace than ever. But know this:  When surveyed in 2006, 56% of graduate business students self-reported that they had engaged in some form of cheating or questionable behavior during the past year. That compared to just 47% of their nonbusiness peers.2

Fraud Is Not Prevented by Hiring Only “Good” People

Background checks are important, but if you think you’re keeping the “bad” ones out of your workplace, you should know that most fraud perpetrators have no criminal or suspect backgrounds. Consider these statistics from 2016 from the Association of Certified Fraud Examiners: 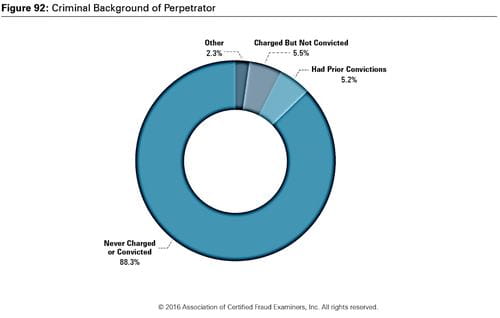 It’s Not Who You Think

Viewing fraudsters as being primarily workers from the lower end of the education scale would be a largely erroneous stereotype. You might be surprised to learn that 60.5% of all fraud perpetrators held either a university degree or a postgraduate degree.3

That’s right, those well-educated white-collar workers you want in your ranks and whom you trust in your management positions—the ones who’ve attained their bachelor’s degrees and impressed you with their résumés—will statistically commit the most instances of occupational fraud.

It’s Not the Newly Hired

You also might suspect first-year employees as being “riskier” and more susceptible to fraud. After all, as former “outsiders” now working inside your organization, they haven’t yet developed an allegiance to you, and your organization is still building trust in them. Yet here again, statistics show that assumption would be wrong. Instead, the longer the tenure, the more incidents of fraud and the bigger the losses:

As these and other statistics clearly illustrate, employees will steal, and ironically the biggest fraud risks lie within longer-tenured, more experienced, and better educated, employee populations—the very employees organizations are more likely to trust.

You can help prevent fraud by implementing robust internal controls, ensuring those controls are effective, and preventing the improper override of those controls by employees in any position, regardless of their background.

And remember, as statistics bear out, “trust” is not a control.