How to handle communications in a crisis

Whether you’re reaching out to employees, customers or the media, getting communications right during a crisis or a period of great change can be stressful in and of itself. You’re under pressure and in the spotlight. Get it wrong and your carefully constructed reputation could be the next crisis.

Ask Boeing, whose initial lack of transparency after two 737 Max crashes left the company reeling from a PR standpoint even before the plane was grounded.

Or Apple, whose response to a bug that let people listen in on FaceTime conversations was, “We’re aware of this issue and we have identified a fix that will be released in a software update next week.” That rote-sounding message was no fix for customer anger.

External gaffes grab headlines, but poor internal communications can affect organizations just as much. Inadequate communications to and among employees cause large companies an average loss of over $60 million a year, studies have found.

Here are some tips to help you get your message across and avoid a communications disaster when bad news or unforeseen events put your company under pressure.


Disasters and bad news happen. But if you plan ahead and communicate with care, you’ll emerge with a solid reputation, helping you recoup your losses much sooner than you otherwise would.

Navigate the impact of COVID-19.

Fill out the form below and a member of our team will get in touch with you. 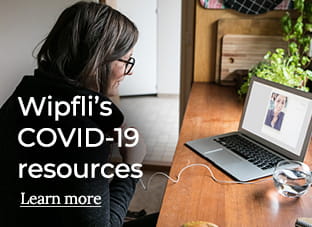 How to reverse quiet quitting in financial services
10/24/2022
By: Anna Kooi, Michelle Joseph
Succession planning is retention insurance for your financial institutions’ future
10/12/2022
By: Barbara Low
Want to better compete in the labor market? Now is the time to review compensation
10/10/2022
By: Paige Oveson
Read All Wipfli Insights