In part two of our planned multi-part series, we continue to follow the migration of the allowance for loan and lease losses (ALLL) for banks that have adopted Accounting Standards Codification (ASC) 326 – Financial Instruments – Credit Losses (CECL) compared to non-adopters, as well as the impact of the COVID-19 pandemic on loan loss provisioning.

In this update, we will review ALLL trends through the quarter ending June 30, 2020, as well as expand our analysis to cover the initial adoption impact for select CECL adopters.

The impact of CECL adoption

As noted in part one of this series, we continue to see the early impact of CECL, which was the subject of much speculation in previous years. Calendar year-end SEC filers that are not smaller reporting companies or did not use the CARES Act provision to delay adoption had to adopt CECL as of January 1, 2020. A company generally qualifies as a smaller reporting company if it has public float of less than $250 million or has less than $100 million in annual revenues and no public float or public float of less than $700 million.

Many banks took advantage of the CARES Act provision and delayed the adoption of CECL, providing us a with unique situation where banks of similar sizes estimated their ALLL using two different models: the legacy incurred loss model and CECL.

To gauge the impact of CECL adoption without the effects of COVID-19, we reviewed approximately 150 SEC banks with assets between $3 billion and $50 billion. Of those banks, approximately 100 adopted CECL in 2020 and 50 did not.

Presented below is the ALLL to Average Loans since December 31, 2018, bifurcated between banks that adopted CECL and those that did not. 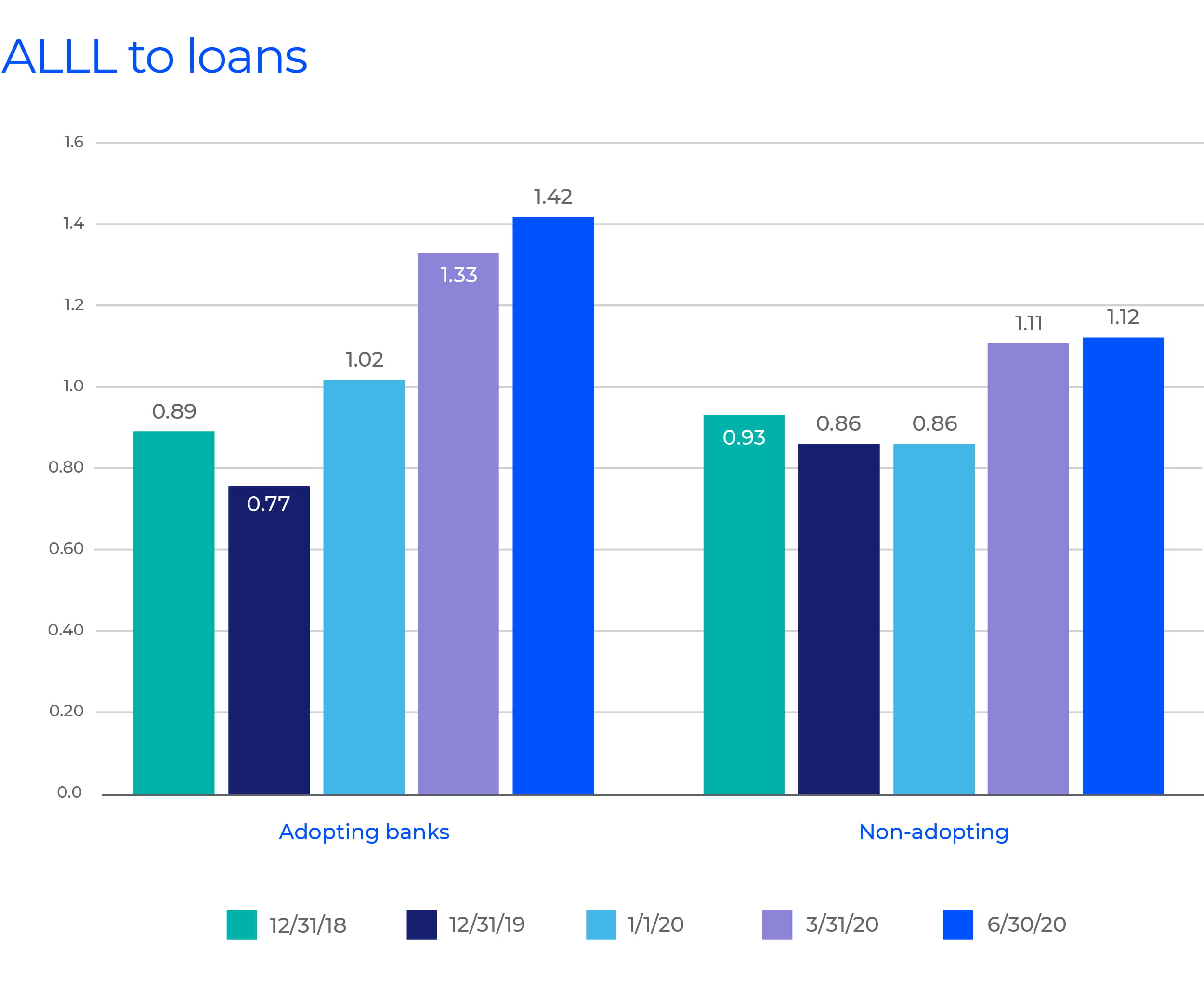 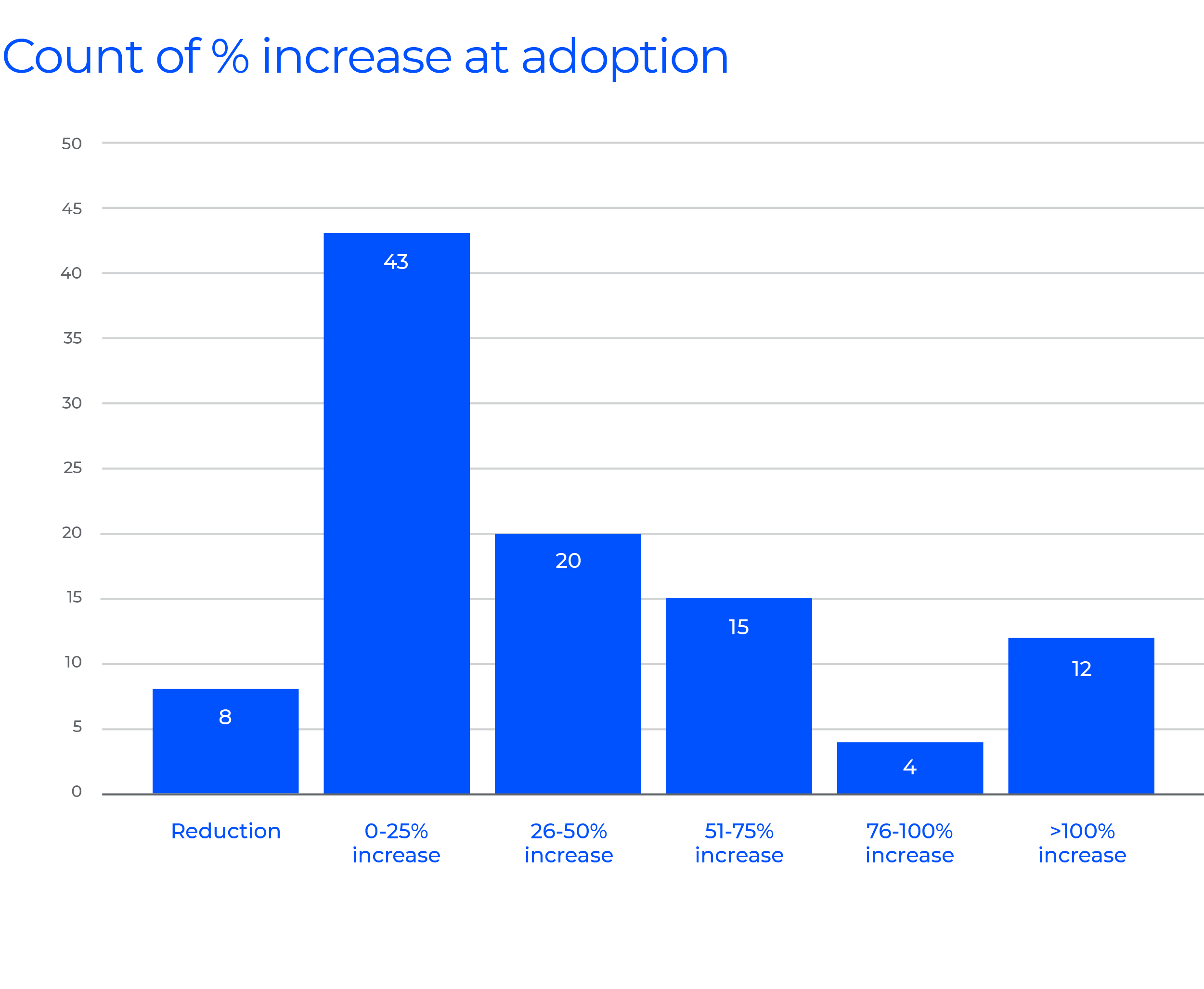 The impact of COVID-19

In addition to looking at the impact CECL is having on the ALLL to Average Loans, we’ve looked at overall changes for all banks stratified by asset size to assess how the economic ramifications of COVID-19 may be impacting all banks. We reviewed the ALLL to Average Loans for just over 5,000 U.S. banks. The table below summarizes total banks by the various asset sizes.

The table below summarizes the average ALLL to Average Loans since December 31, 2018 by various asset sizes. 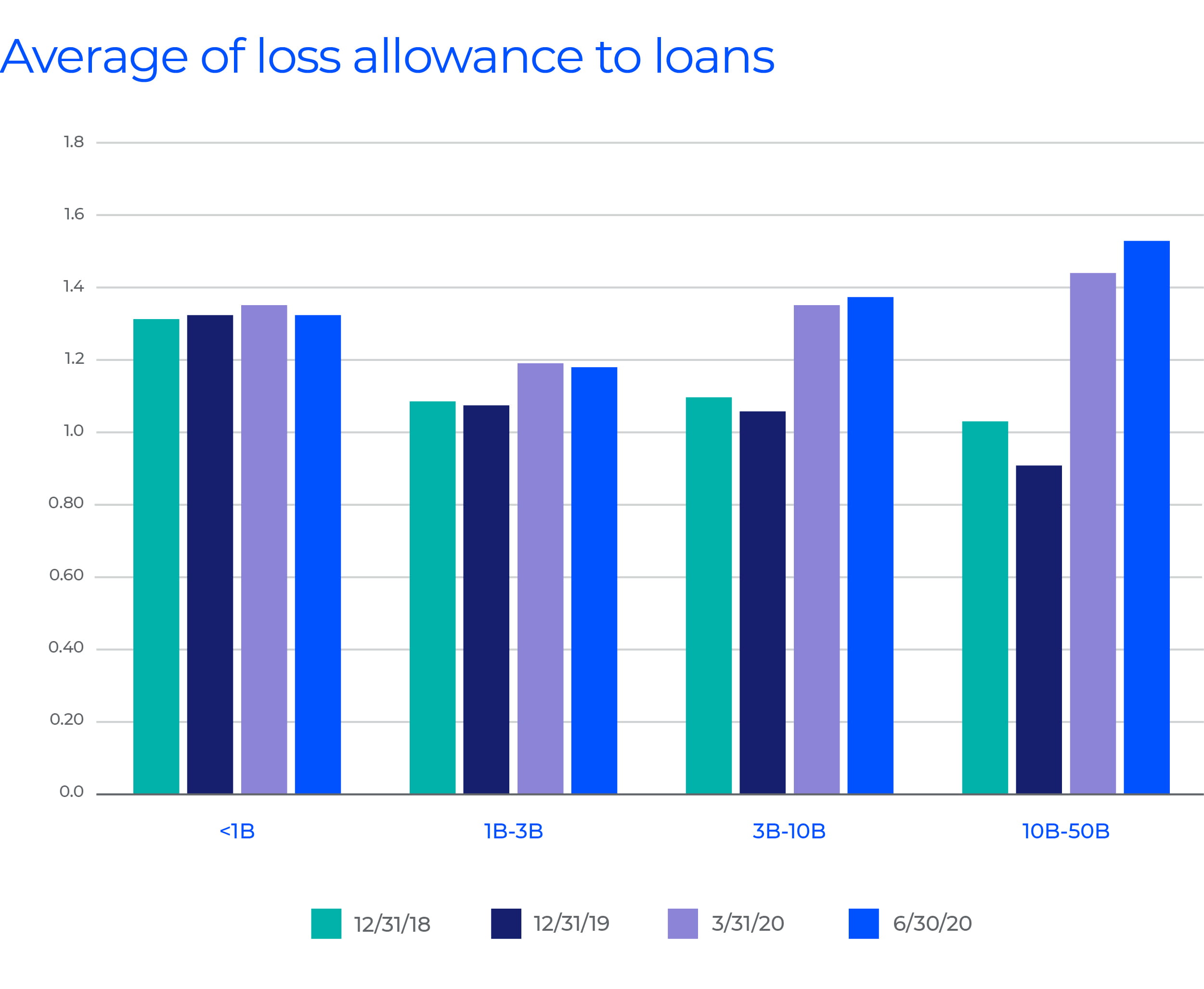 As noted in part one, prior to March 31, 2020, the ALLL to Average Loans remained relatively stable or declined slightly in all asset bands as banks benefited from a strong economy and positive credit metrics.

As of March 31, 2020, that trend changed with the U.S. economy facing significant impacts from COVID-19. The impact to businesses and consumers had a direct impact on all banks, resulting in increased provisioning and an increase in ALLL to Average Loans across all asset bands in our analysis. The impact was less pronounced in the less than $1 billion asset band and gradually increased across the larger asset bands. March 31, 2020 was also the first quarter that many banks were required to report quarter-end results under the new CECL standard. Banks impacted by CECL generally have assets of at least $3 billion, as they are most likely SEC filers that are not smaller reporting companies.

As of June 30, 2020, we saw very little quarterly change in ALLL to Average Loans for banks with less than $3 billion in assets. There could be many reasons for this minimal change. Most likely, these banks continue to closely monitor the COVID-19 impact to their loan portfolios; however, as of June 30, 2020, there likely was insufficient loss experience to warrant increasing the ALLL, as various economic stimulus packages are temporarily masking underlying credit deterioration caused by COVID-19, and banks had already made qualitative adjustments to their ALLL as of March 31, 2020.

Larger banks, including the largest banks in our analysis, increased their ALLL to Average Loans at a greater pace during Q2 2020 than did their smaller peer banks. As previously noted, the adoption of CECL is likely the most significant factor in the increase in ALLL to Average Loans during Q2 2020. This should not come as a surprise, as CECL’s primary intention was to improve financial reporting by requiring earlier recognition of credit losses on loans.

There are many factors that go into the development of the ALLL estimate under CECL. Smaller banks are slated to adopt CECL by January 1, 2023, and it remains to be seen if smaller banks will see a similar increase in the ALLL to Average Loans ratio as their larger peers that recently adopted the standard. However, most industry experts expect to see an increase in the ALLL to Average Loans for all adopters. We will continue to monitor the difference in ALL to Average Loans for banks less than $1 billion and adopting banks to see if there are any possible insights about CECL adoption impact that banks less than $1 billion can learn from their larger adopting peers. 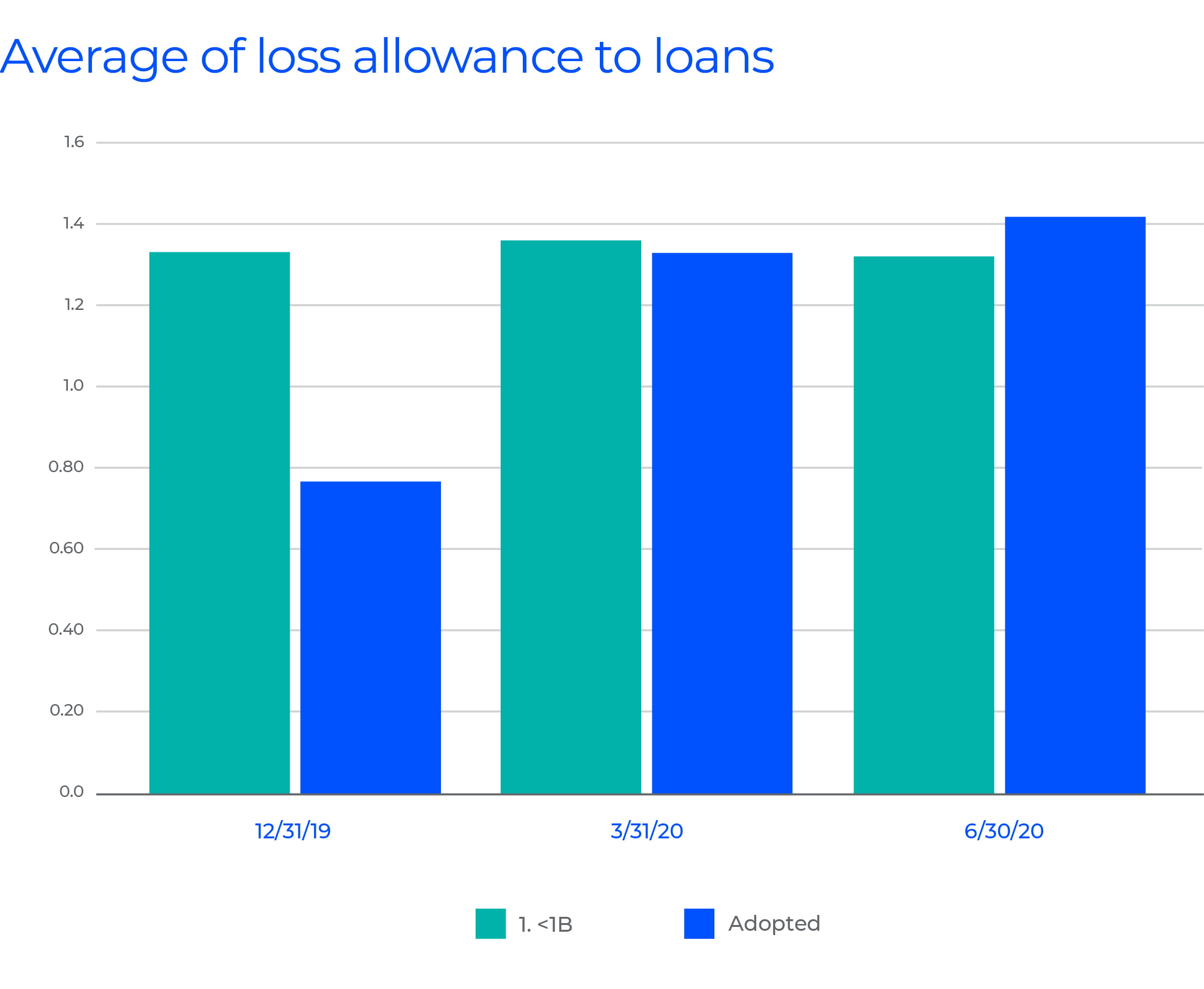 We are continuing to monitor the impact of CECL adoption

Although the impact for many banks remains to be seen because most banks are not required to adopt CECL until 2023, our review of approximately 150 banks with assets of $3 billion to $50 billion shows adoption of CECL will likely result in a material impact to banks’ ALLL to Average Loans at adoption and a more rapid increase in ALLL to Average Loans during economic downturns.

As the economic impact of COVID-19 becomes more certain in future quarters, we will continue to monitor ALLL to Average Loans trends throughout the industry and how those trends differ between banks estimating their ALLL using the legacy incurred-loss model and those using CECL.

This is the second of a multi-part series. The third installment is planned for mid-Q4 2020 after the reporting by bank of their Q3 results.

If you’d like to learn more about CECL and how Wipfli can help you adopt the standard, click here.

Or continue reading on:

Measuring the impact of CECL adoption

CECL: Are you procrastinating? 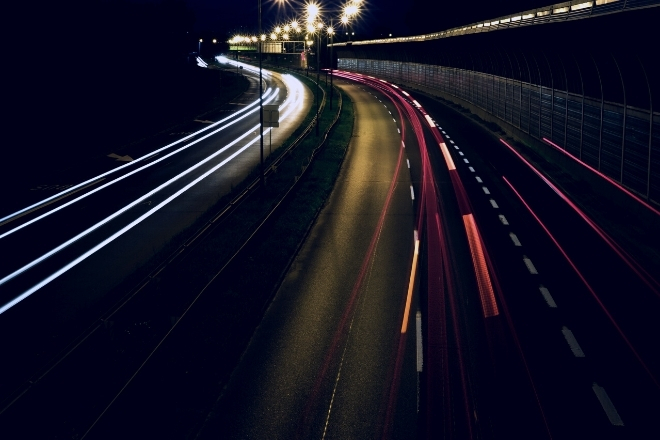